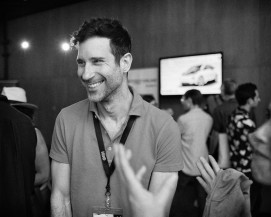 Yuval recently played a guest star on “Bull” and appeared in the feature film Norman starring Richard Gere. Yuval was seen on Amazon’s “Red Oaks”, and NBC’s “Believe”, shot a large guest star role on “Blue Bloods”, opposite Len Cariou and had a large guest appearance on “Law and Order: SVU”. He was featured in the film That Awkward Moment in a role opposite Zac Efron. He stars in the films Abbie Cancelled which debuted at Sundance Film Festival and screened all over the world in various festivals, earning critical praise and the award for Best Short at the Big Apple Film Festival in New York. He also stars in The Friend from Tel-Aviv (DGA Award) and Center of the Universe which debuted at the Brooklyn International Film Festival before screening at a dozen international festivals and was which subsequently bought by LOGO.

This season, Yuval was seen off-Broadway in Primary Stages’ production of A WALK WITH MR. HEIFETZ, directed by Andrew Leynse. He originated the role of Caiaphas, in Olivier-nominated writer/director Yael Farber’s critically acclaimed adaptation of SALOME at Shakespeare Theatre Company, which garnered 7 Helen Hayes Awards including Best Ensemble. He played Off-Broadway opposite Natasha Lyonne in the US Premiere of Mike Leigh’s play TWO THOUSAND YEARS, was hysterical in the role, and was singled out by the NY Times as giving an “outstanding performance”. Yuval was cast by Mark Brokaw to play the lead in the workshop of the new play PAPER DOLLS which was developed through the Sundance Play Festival and the Public Theater. His one man show, SEXCURITY, was developed at IRT Theatre, was shown at Dixon Place and Joyce Soho, and Cleveland Public Theatre.

D.I.Y., the comedy feature he co-wrote with writer Sarah McCarron (HBO’s Luck), was awarded a grant from the Duplass Brothers.

He was classically trained at Boston University where he received his BFA and earned his MFA from the London International School of Performing Arts (LISPA) where he trained in Lecoq based actor created physical theatre with Thomas Prattki. He also studied improv at Upright Citizens Brigade, performs with an improv troupe at Improvolution and teaches at Purchase College Conservatory of Theatre Arts. Yuval is an avid yogi, a staunch recycler and an aspiring underwear dancer.